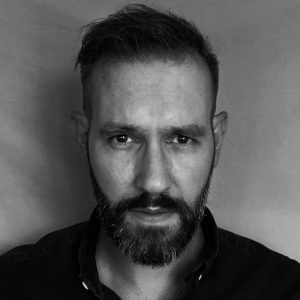 HHNOI is Cologne based composer and producer Marco Petracca, born in Düsseldorf, Germany as a son of Italian immigrants. He discovered his passion for electronic music at the age of 14 while listening to early industrial music in a time when Rave music was taking off.

He made soundtracks for sex hotlines, art school thrillers and tv station adverts in the late 1990s, played in a german electro punk band in early 2000 and released music as part of HEARHERE from 2008 on. In 2012 Petracca began to focus on making music with modular synths, which led to his alter ego HHNOI.

He is mostly known in the modular scene for creating music that pushes the compositional limitations of this technology – not only on record, but also on stage with his fellow label mate and wife Rachel Palmer, whose generative visual art ultimately inspired him to embed more unpredictability into his music.

This can be heard on his latest releases, drawing heavily from cutting out structures and styles found in ambient, post-step and hip hop; rearranging them into free form music that mixes captivating compositions with the unsettling abrasiveness of nontraditional analog and digital sound design.